Its all about Comic Books Baby! 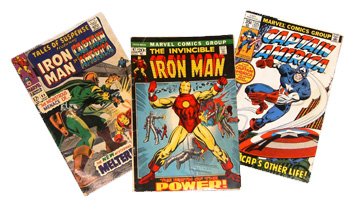 For almost a century, the American comic book has been a staple of popular culture and entertained generations of children, adults, and everyone in between. Long relegated to trash culture, with annoyed mothers throwing away their children’s comics and outraged senators blaming its colorful characters for all of society’s ills, the American comic book has fought what seemed a never-ending battle for the legitimacy and respect it deserved. But despite the exciting action and blistering suspense so colorfully illustrated on the pages, the comic book process has long been a meticulous process for the artists and writers who craft the worlds and characters that dazzle their readers. The process has been made easier by the modern digital era, requires every bit as much of the artistry as it did in the early days of the medium.

It all starts with the written word. Much like a film script, a comic book script must crucially be visually literate, meaning that the writer must know how to tell a story with images. There are two main ways for a comic book script to be written. The first way is for the writer to break the action down panel by panel, describing what is happening on each panel and filling in the dialogue for each character in that panel.

The second is more free form, where the action is described in general and then it is up to the artist to determine how it is going to be laid out. Either way works, depending on the collaborative relationship between the artist and writer.

After the script is written and finalized, then begins the work of the artists. The penciller is responsible for the initial artwork. He or she is responsible for drawing everything on the page, and must be proficient in drawing not only the characters, but backgrounds, cars, energy blasts, cosmic bolts, space gods, dark elves, damsels in distress, nefarious villains, plucky heroes, and everything in between.

Typically, comic book professionals prefer tight pencils, where the characters are laid out crisply and in fine detail in regards to the shading and composition of the panels. This makes it easier for the inker and is also an opportunity for the penciller to show off his artistic skills. A good penciller can do one page of comic book art per day.

All art work is done on 11×17 bristol board, since it is a surface that is smooth enough to handle the delicacies of pencil work and sturdy enough to be able to keep ink from bleeding through.

Next, the letterer comes into the process. In the old days, lettering used to be done by hand, and the penciller was responsible for knowing beforehand where the word balloons would be placed, and therefore would leave enough space in their composition to accommodate the balloons. Then, once the art was done, the letterer would use a small, plastic device called the Ames lettering guide to rule in the space in which the lettering would go. Depending on how large the lettering needed to be, the Ames guide would be adjusted and the proper sized ruled lines would be created. Then the letterer would take a lettering pen, in some cases a quill, and use ink to write in the letters. That being done, they would erase the ruled lines and put in the word balloon.

In today’s comics, digital lettering has all but taken over the letterer’s job. Now, the penciller no longer has to leave room for the letters. Once the artwork is finished, then the piece is scanned into digital software that allows the letterer to type in the words and place the balloons anywhere they please. It is a much easier process, though some would argue it has taken away from the handcrafted beauty of old comic book lettering.

Once the penciller and leterrer are done with their work (at which point they usually collapse into a coma) the pencils are handed off to the inker. Inkers are often mistaken as tracers, but in truth that is far from the case. An inker is there to go over the pencils with ink, yes, but really they are there to make the penciller look good, and if necessary, correct their mistakes. A good inker can make good pencils look great and great pencils look terrific. Upon receiving the pencils, the inker usually transfers them to non-photo blue, thus making certain that once the inks are scanned and printed, only the black ink will show. Using a brush (usually the Windsor-Newton Series 7), crow quill, or tech pen, the traditional inker will go over and embellish the pencils, correcting mistakes, adding depth and texture through line weight and feathering, and using darkness to illuminate the artwork.

Digital inking has become very popular in recent years, although some artists still stick to traditional tools. A simple guide to inking through Adobe Illustrator is as follows:

First Scan in the original pencils, and create a transparent layer above it (1). Then, selecting the Pen Tool, it is important that you select a digital Art Brush. First, create some lines of varying width with the Pen Tool and then convert the ones that are satisfactory into brushes. This is done by going into the Brushes Panel and selecting New Art Brush (2).

This will enable you to get variance in line weight with the different thicknesses, according to where it is needed. This is where knowledge of traditional art becomes crucial, since the same principles of texture, weight and dimension apply in the digital realm as it does for artists working on paper.

After the inker has completed their work, the finished inks are turned over to the colorist. The colorist is responsible for adding color to the finished inks. In the early days of comic book coloring, the colors were mostly flat, mostly due to the limitations of printing technology. Today however, the majority of coloring is done digitally, and artists have limitless tools at their disposal to make the colors as varied and nuanced as a painting, with the confidence that their artistry will be reproduced accurately on the printed page.

In Illustrator, the easiest way to color is to create a layer underneath the ink strokes. This way, when coloring, the black ink lines will create a border that the colors won’t cross. To add detail and shading, simply add additional layers and build colors on top of them, thus giving the drawing dimension and depth (2). While this is just a basic guide, Illustrator has multiple tools to allow you to give the drawing the necessary sheen and seamlessness of color that can be seen in the most professional of comic book art.

Sambaran Chatterjee is a talented artist from West Linn, and his work can be seen below at the following links, please check our his amazing artwork and share it around the design community!

Time for Polygons Baby! There’s a reason why things may have been a bit quiet here at Layerfor…

Adobe Illustrator – The Basics! How to underline text in illustrator, easy right?…Well a…

A Roundup of Top Udemy Courses for Designers What are the best Udemy Graphic Design Courses? Digital…