Checking out the Blackpool Design Scene!

When you think of Blackpool (UK), what are your first impressions? I bet if you asked the average person on the street they would resort to the stereotypical images: Donkey Rides, Sticks of Blackpool Rock & the Pleasure Beach. There’s nothing wrong with this, thats exactly what I used to think as well, until i met my girlfriend who completley changed my perception of the town, and who is subsequently the inspiration for this article. So lets go ahead and check out the blackpool design landscape!

In May 2006, Blackpool Council began work on an £87m redevelopment of the Promenade & Seafront, including vital sea defence installations as well as a variety of new, artistic items, notably the now infamous “tulips” aka: The Giant Spoons, and of course the Comedy Carpet by Gordon Young (to name a few).

Completed in 2011, the promenade now has a more modern feel to it, and in this article I will aim to review some of the highlights of this regeneration from a design standpoint, and consequently illustrate how Blackpool in this modern day and age, is becoming a beacon for design inspiration. From Branding and Identity, all the way through to sculptures and monuments, Blackpool is becoming a place for designers and architechts to show off their skills, it truely is becoming a platform for creative artworkers.

You’ll be amazed by the subtle Typographic gems scattered across the town as well as some amazing scultped pieces throughout the promenade. If you’re a designer, artist, photographer or just a creative person, read through this article and check out what Blackpool now has to offer, or better yet.. go visit Blackpool yourself! 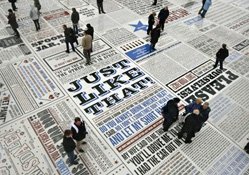 The comedy carpet sits smack bang in the middle of the promenade not too far from the tower, and was completed in October 2011. Made by Gordon Young, it is a huge feat of typographic elements built into concrete panels that are conjoined to form an amalgamation of different quotes from comedians over the years.

From a Typography standpoint this is a true testament to what can be achieved simply with type, with an array of Sans Serif, Serif, Slab Serif and more fonts making up each block. Each piece is perfectly kerned with precise leading (typography nerds check in now), and the variety of typefaces makes each panel unique and fresh to the eye. Personally my favourite quote is:

If you want to see an excellent example of typography, then look no further than this amazing piece by Gordon Young. 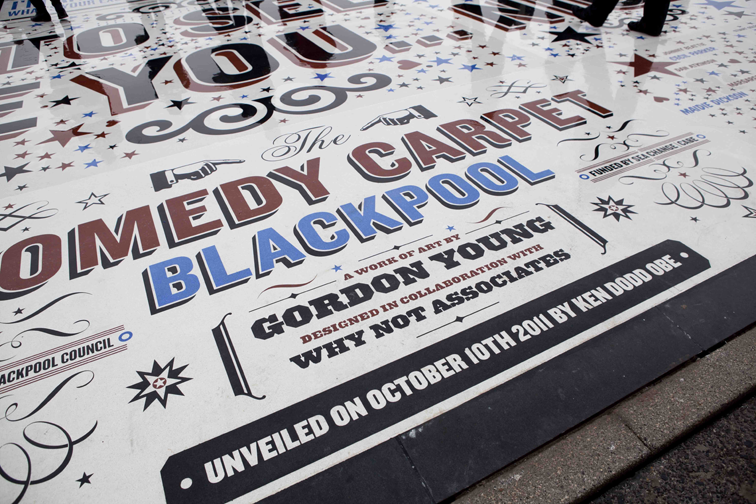 Designed by Architechts Rijke Marsh Morgan – Festival House is a well designed piece of architecture that was part of the 87m Redevelopment of Blackpool’s revamped promenade. It was completed on December 17th 2011 and is primarily used as a registry office, with a great view of both the tower and the Irish Sea, its perfect for tieing the knot.

Not only is this building great to look at, but it is also pioneering in terms of the materials used to create it. The structure (which is visible internally) is made from cross-laminated timber and is labelled by the architechts who created it as “the new concrete”. The Bricks on the exterior were made by a company called Lignacite, and they have recycled fragments of glass which reflect & glint in the sunshine. Quoted by the Architechts themselves, this building embodies:

“The absence of what you usually see in public buildings: ducts and vents everywhere. There is an absence of crap”

In 2002, Blackpool Borough Council (in conjunction with the Art Department) launched a competition to design a swivelling piece of architecture that would be based on the South Shore promenade. This commission helped serve as an addition to the 87M Redevelopment of Blackpool’s Promenade and was one of the newest scultures to be completed on the promenade back in 2006.

Quoted by Architecture.com, the Blackpool Wind Shelters that were built in Spring 2006 are “Works of art that provide welcome respite from the elements”. The Wind Shelters are unique and cant be missed along the promenade, with their shape and form being extremely contorted.

Another recent development, the Solaris Centre in Blackpool has become a revolutionary self-sustaining building for its visitors:

This development replaced the old 1930’s Solarium that became derelict along the seafront, and what a redevelopment it was! The Solaris Centre is covered in Solar Panels, has two giant Wind Turbines and also makes use of solar water heating to provide plenty of reusable energy for it’s visitors. Not only is it environmentally friendly, but it is also aesthetically pleasing, with numerous spherical sculptures situated on the outside of the building causing people to turn their heads as they drive past.

Blackpool’s old Dodgems were relocated to make way for a plethora of new sculptures, many from David Harber (commissioned artist). They serve as a place for people to go and relax away from the hustle and bustle of the Pleasure Beach Theme Park, with a variety of different pieces including waterfalls, spherical sculptures and iron trellaced walls. Its a great place to go if you go to Blackpool’s Pleasure Beach and want a place to go that has some amazing works of art.

“I wanted this sculpture to have a gem like quality, to be both monumental, and intimate, and reflects the dynamics of Blackpool, its wonderful history, and ever changing nature.”

Walking through Saint John’s Square, this particular piece of art cannot be overlooked, with its vibrant color scheme coming alive at night, and the shape and form reflecting the waves crashing against the sea defences of Blackpool itself, its a beautiful piece of art and reaffirms the essence of this article: that Blackpool really is a beacon for design inspiration.

Interesting Fact:The Wave is both the name of this sculpture and my favourite radio station in Blackpool!

The Blackpool Tower Rebranding is one of my personal favourites from all of the artistic developments in this article. The main reason for this is its simplicity and overall effect. In David Airey’s book “Logo Design Love” (see the full review here) he mentions that a good logo should have “one” key feature that makes it standout from the crowd of logo redesign. The Blackpool Tower Logo encorporates what i believe to be at least 2-3 interesting features that make it stand out, yet it keeps a simple form that can be applied to a variety of different formats (another key pointer in David Airey’s 2009 Best Seller). The blackpool design scene is booming!

Now admitedly it takes more than a few quirky features to make up a successful brand mark, but i do believe that the logo’s simplistic color scheme and use of a clean, sharp sans-serif typeface, makes this rebrand a winner. The Blackpool Tower Logo is simple yet memorable, timeless and appropriate: all traits of brilliant logo design.

I hope i’ve given you all a good reason to go and visit Blackpool. It’s a place that has had a lot of redevelopment over the last 10 years, and artists from all over the UK are flocking to Blackpool to showcase their artistic prowess. From logo design to groundbreaking feats of architecture, Blackpool is fast becoming a beacon for design inspiration. More people should visit the town and appreciate all the new features it has to offer, not just to designers, but to everyone big and small alike.

Is that Real or Not?! Photorealism is an art form that is incredibly difficult to pull off effective…

Hipster Style with the Layerform Hipster Vector Pack! The Layerform.com team have been busy slaving …

Handdrawn Vectors for all! Things have been a bit quiet on Layerform recently, we have been working …