Ok, so how to rotate text in photoshop, is this going to be a hard tutorial? Fortunately for you, Nope!

But that being said, it’s not necessarily a skill that is useless, its probably something in fact that you’ll use extremely often, and alot of the tips actually apply to other Adobe programs also such as Adobe Illustrator.

So sit back, crack those knuckles, grab a cup of coffee and lets get started learning how to rotate text in photoshop.

How to rotate type in Photoshop – Lets go!

So in general, when thinking of rotating text in Photoshop, there needs to be a clear goal in mind. Do you want to rotate the direction/orientation or just rotate the axis around a single point?

We’ll start with changing the text orientation first, as its probably the easiest, and a nice simple way to kick off this tutorial!

Ok so this is an easy one. Basically we want to change our text from going on a horizontal axis to vertical. To do this simply start a new Document by going to File > New, then Press T, or Select the Type Tool. From here type some text to begin with. 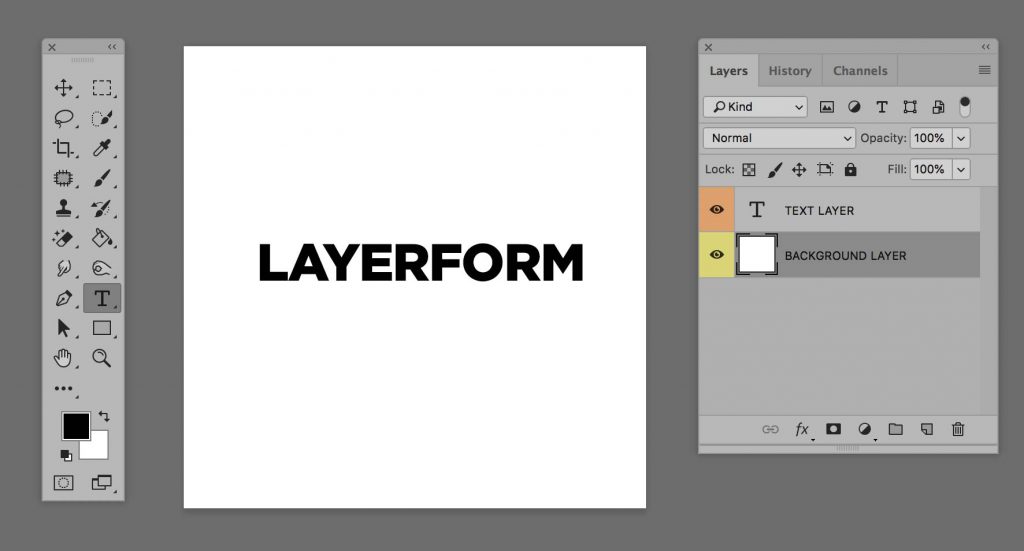 From here you want to select your text and look at your toolbar at the top of the program, then look for toggle text orientation and press it, to toggle from vertical to horizontal.

Then Voila! You have just changed the text orientation! 😀

Ok so thats a quick way to change the orientation, but lets get into the bulk of this tutorial, how to rotate text in photoshop. There’s a few different ways we can achieve this, so lets get started with the same set up we had before, a background layer and a text layer on a horizontal axis (default)

Let’s start with some basics, now these tools are all linked around the “transform/free transform” options within Photoshop. Ok so lets say we want to Rotate the text 90 Degrees Clockwise, so with your text selected, simply to to Edit > Transform > Rotate 90 Clockwise 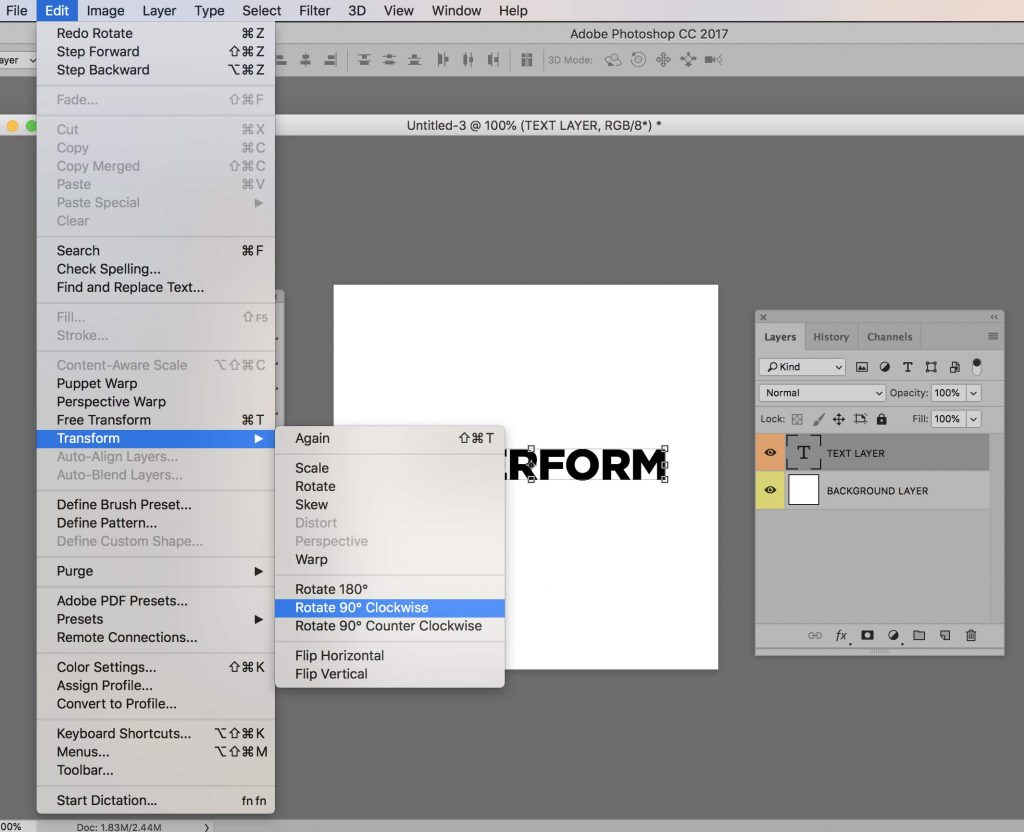 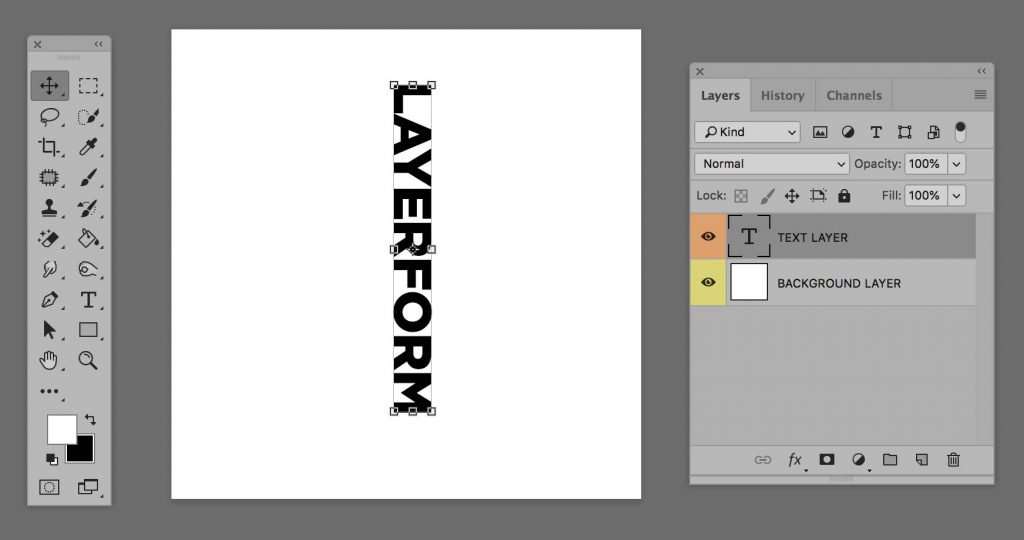 The Best Way to Rotate Text

When thinking of how to rotate text in Photoshop, the one way that is used by 99% of Designers is the Free Transform Tool, or Cmd/Ctrl + T

Starting from our simple document again, this time if you go to Edit > Free Transform (Cmd/Ctrl+T), you’ll notice the transform controls change slightly, giving you the ability to rotate your next 360 around a point, so you can choose your desired angle/effect. 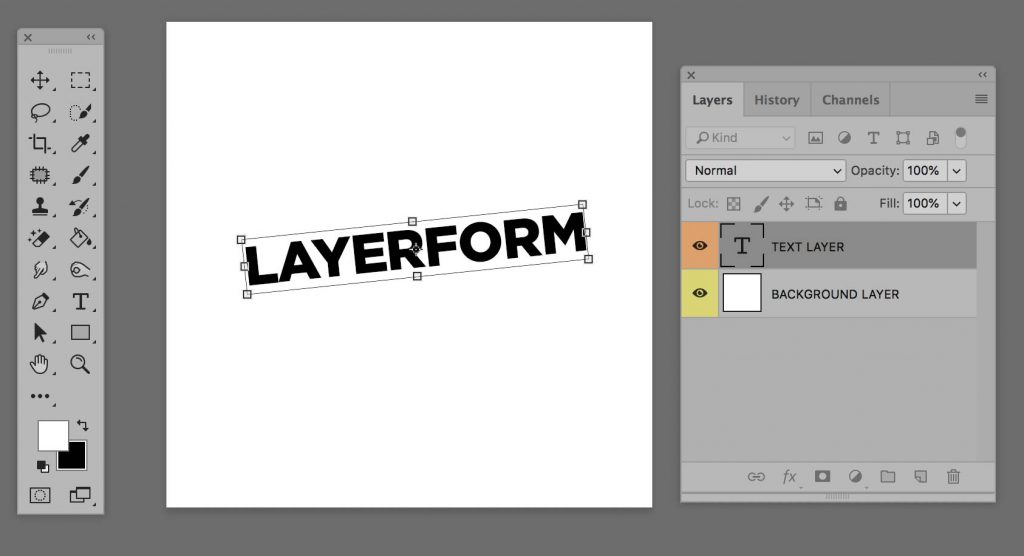 Voila! You just just learnt how to rotate text in photoshop. A simple yet incredibly useful tutorial.

Thank you for viewing our Photoshop Tutorials, if you would like to see more then message us on social media to tell us what you’d like to see.

Posted in: Articles, Graphic Design, PhotoshopTagged: how to rotate text in photoshop
Previous

How to Embed Images in Illustrator (2022 UPDATED)

How to Make a Dotted Line in Illustrator (2022 UPDATED)

Free Icons Ready for some Free Icons? It’s been a while since our last Freebie so we thought I…