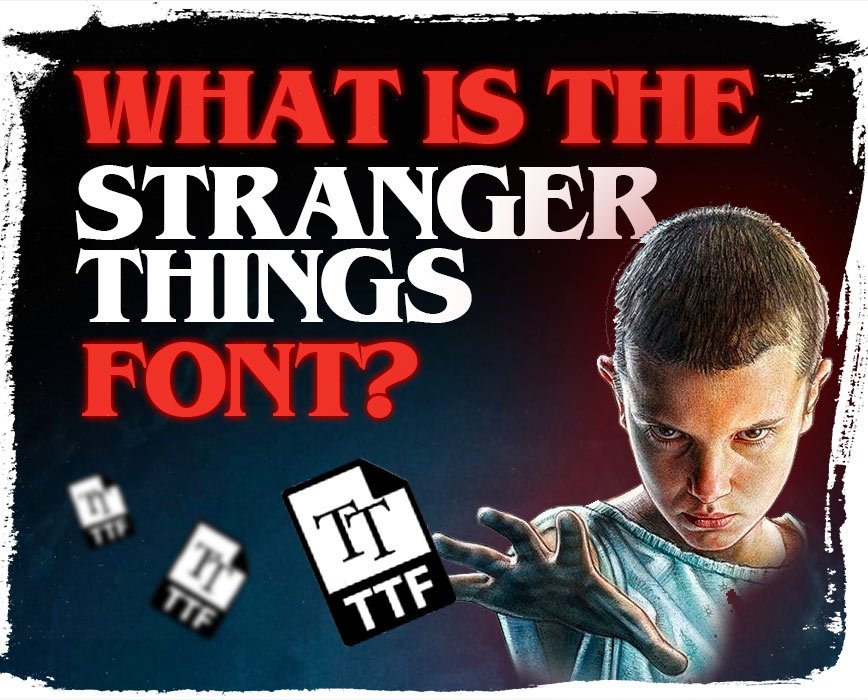 So what is the stranger things font? What many people may not know is that the stranger things font is a very old typeface created by Typographic Superstar Ed Benguiat and it was actually used for the cover’s of the old Stephen King Novels, so you can see the angle that the creative studio (Imaginary Forces) behind the production of Stranger Things were trying to mimic.

What is the stranger things Font?

The font itself is called ITC Benguiat and even before Stranger Things it was known as an extremely well designed and charismatic Typeface, but since the program started it has exploded in popularity. 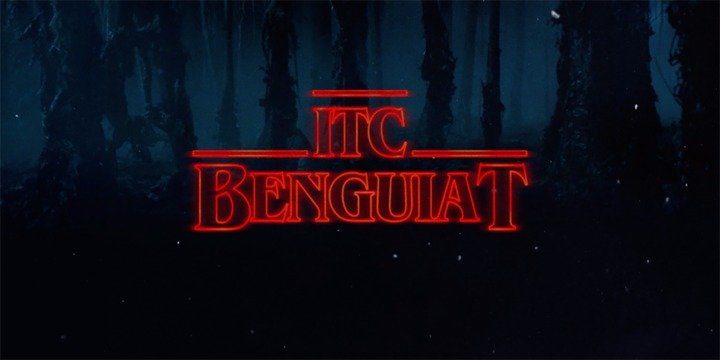 A Brief History of the Stranger Things Font

As mentioned above, ITC Benguiat was created by Typographer Ed Benguiat (Born 1929), an American Lettering Artist who has handcrafted over 600 high quality typeface designs.

He is well known in the industry for working on High Level Re-Brands and Logotype Projects for huge clients such as Ford, Coke, New York Times, Playboy, Estee Lauder to name a few, truly mega level clients.

Ed is well known in the industry not only for his pixel perfect fonts, but also because of his charisma and personality, being a very outspoken and direct person. In his own words

“Everyone always asks me how to become a lettering artist, and alot of people wanna hit that home run, but no matter how much i show you how to make it or how to do it, you’ll never make it. “

It’s perhaps this reason his Fonts have so much personality and charm, is because as a person, so does he. His direct attitude to life is probably what makes his Fonts so perfect as well, he has an incredible attention to detail that a lot of modern type lettering artists do not have.

The Font ITC Benguiat was originally known for being used on the cover’s for Stephen King’s famous novels amongst others, as can be seen below: 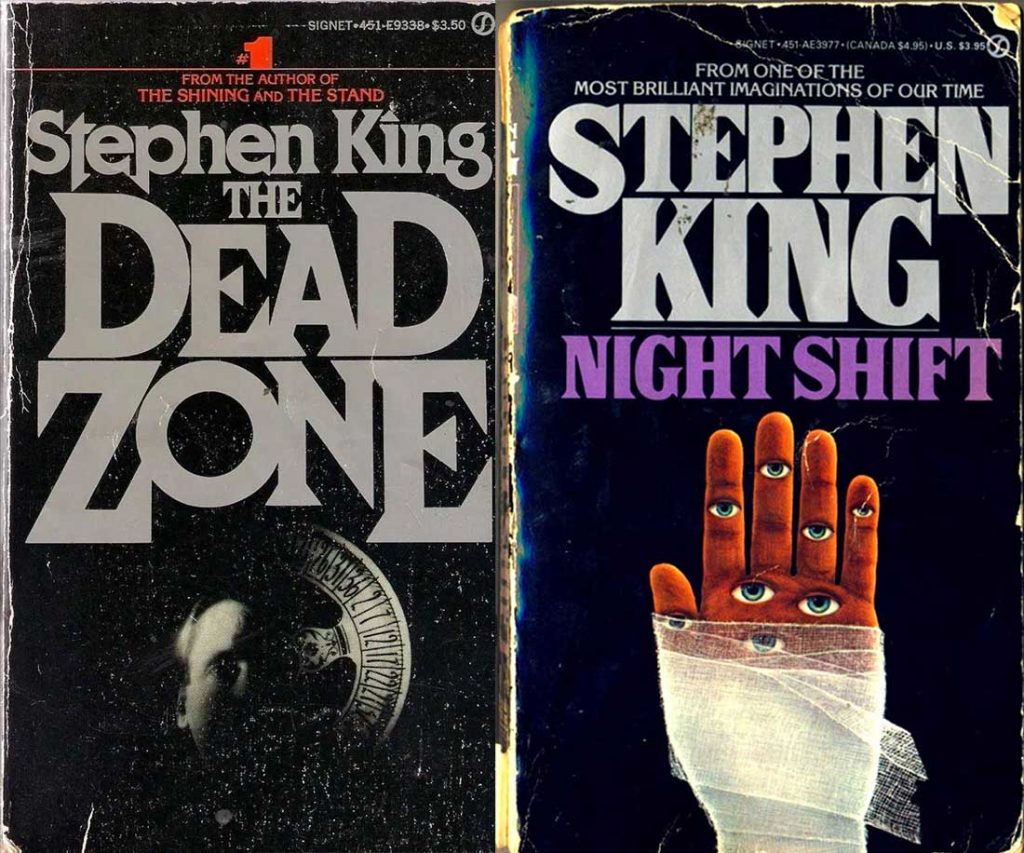 For Stranger Things the creative studio (Imaginary Forces) actually tried multiple different typeface ideas and had a play around to see what worked and what didn’t, but unfortunately none of them were perfect for the job, and only the crisp, pixel perfect glyphs of ITC Benguiat were chosen in the end!

As you can see below, there were many different types of handdrawn script fonts and grungy sans serif that were considered, but when you look back to ITC Benguiat that was chosen in the end, you can understand how they made the right choice! 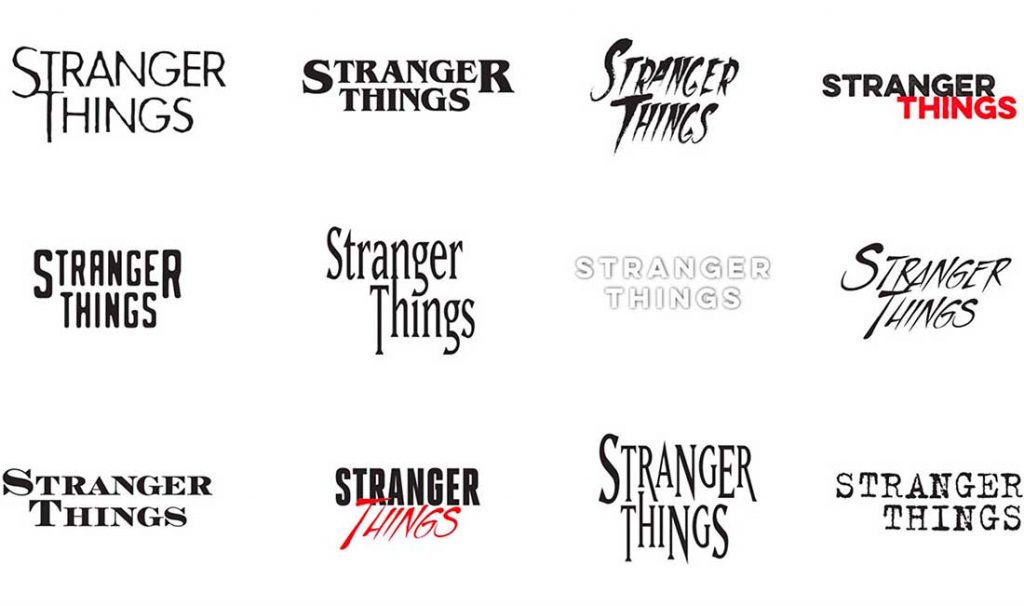 These are some examples from motion graphics sequences that were made during development, and as you can see…it just doesn’t look at sweet as Ed’s Font.

Why does ITC Benguiat work for Stranger Things?

Well it’s almost obvious, but Stranger Things is “set” in the 1980’s, and ITC Benguiat was actually released in the 1980’s, so in essence they are a match made in heaven as the Font is essentially a product of its era.

But not only this, it also fits the art nouveau style that Stranger Things is almost rooted in. But overall the whole branding ties together, even with the music, to create a perfectly crafted 80’s Synthwave, Funky type of feel.

But is it perfect, was anything changed?

Yep, for the Stranger Things logo & opening sequence there were quite a few things that were altered, including, but not limited to the kerning and leading, while many of the glyphs were actually reshaped. You can see from the image below what was altered: 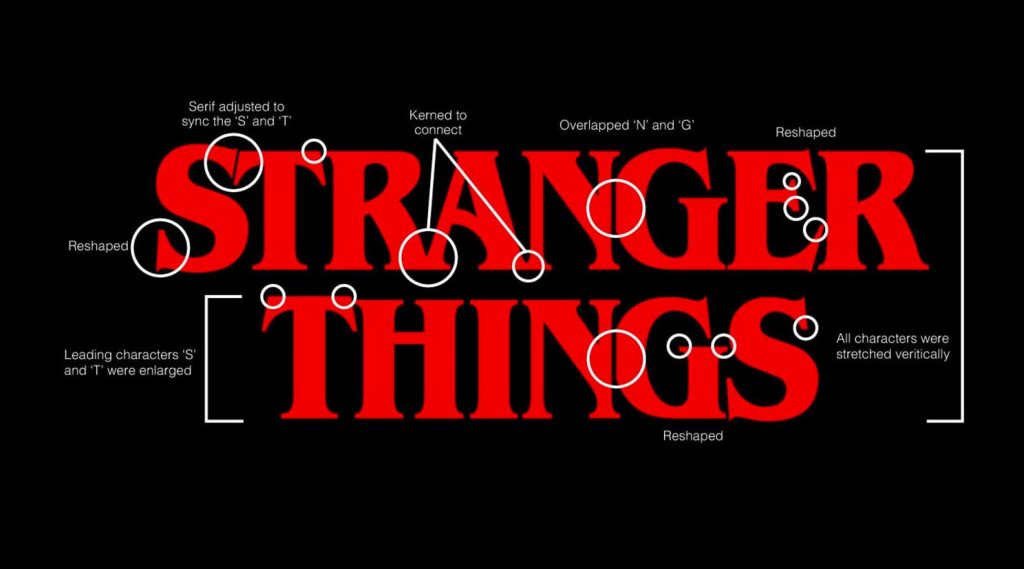 The Stranger Things Font, aka: ITC Benguiat can be downloaded here (or by clicking the image below). Yes, it’s a premium font, but it’s been crafted by one of, if not the greatest Typographers / Lettering artists that is still alive today.

This man is a master of his craft, and if you’re looking to create a truly wonderful piece of Typographic Artwork, whether that is for personal or commercial usage, then the payment will be worth it’s weight in gold.

The stranger things font download can be found here at MyFonts where it includes a whole plethora of features, weights, & styles for you to get stuck into!

How do I create the Stranger Things Glow Text Effect?

This is actually incredibly simply to create in Adobe Photoshop. All you need to do is be able to create a stroke, use the layer mask tool, Gaussian Blur Tool and Outer Glow Effect.

Here’s a mini tutorial on how to create the Stranger Things Text Effect:

Ok so lets get our basic project set up, create a new document and use the Type Tool (T), to select ITC Benguiat and type out your text. In this project i have just plonked a simple dark background image in the back for contrast.

Ctrl + Click on your text layer until you get the old’ marching ants, this symbolises you have a selection made. 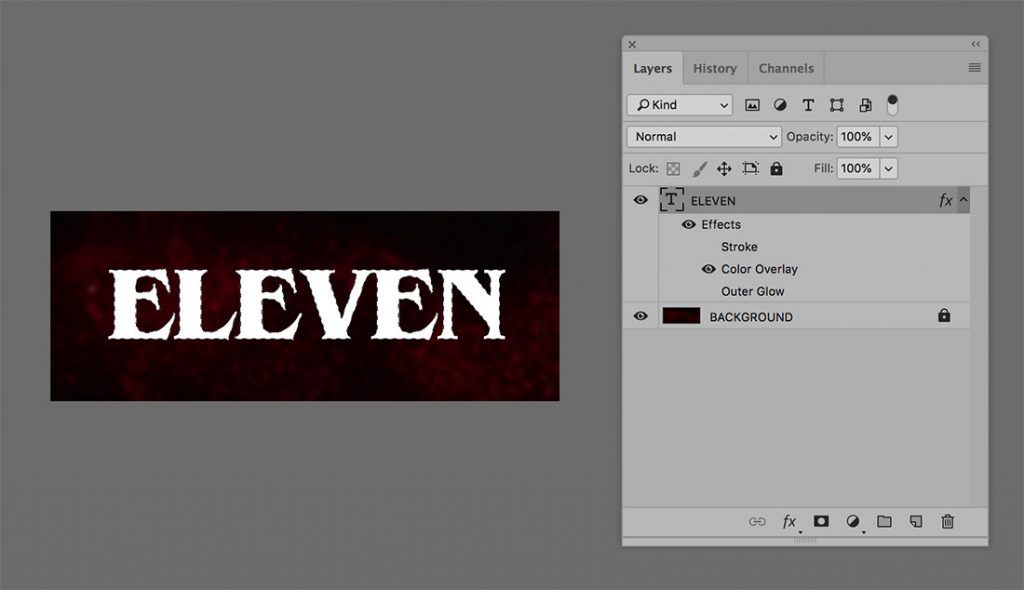 From here create a new Layer then with your selection still active go to edit > stroke, then give it a 3px inner stroke, with a red colour of #ed3330, then hide your original text layer. You should have something like the below image: 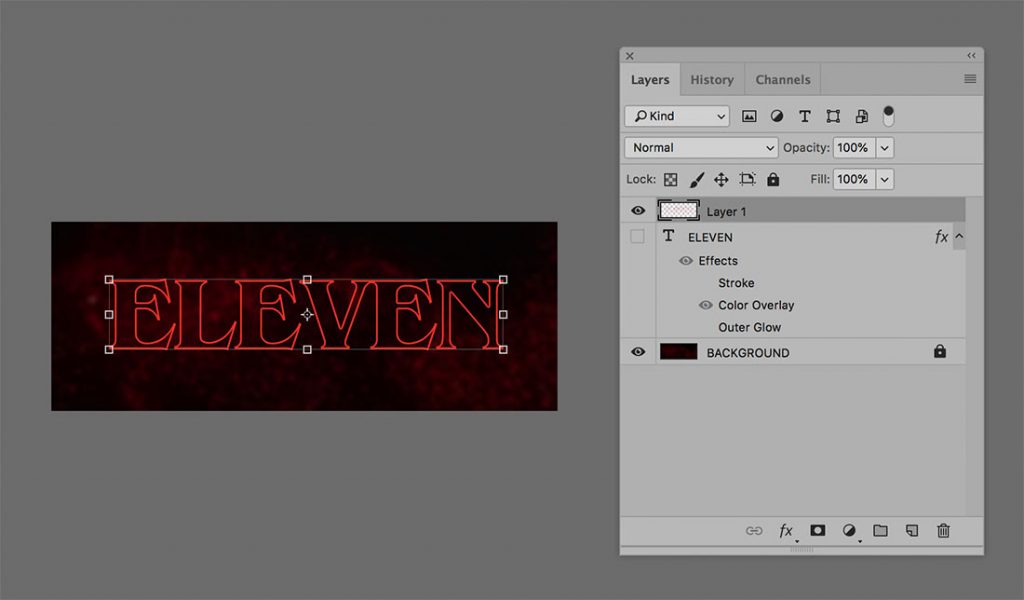 Now what we want to do firstly is right click our new layer and create a new smart object to protect what we’ve made already. Then what we need to do is give it a Layer Mask 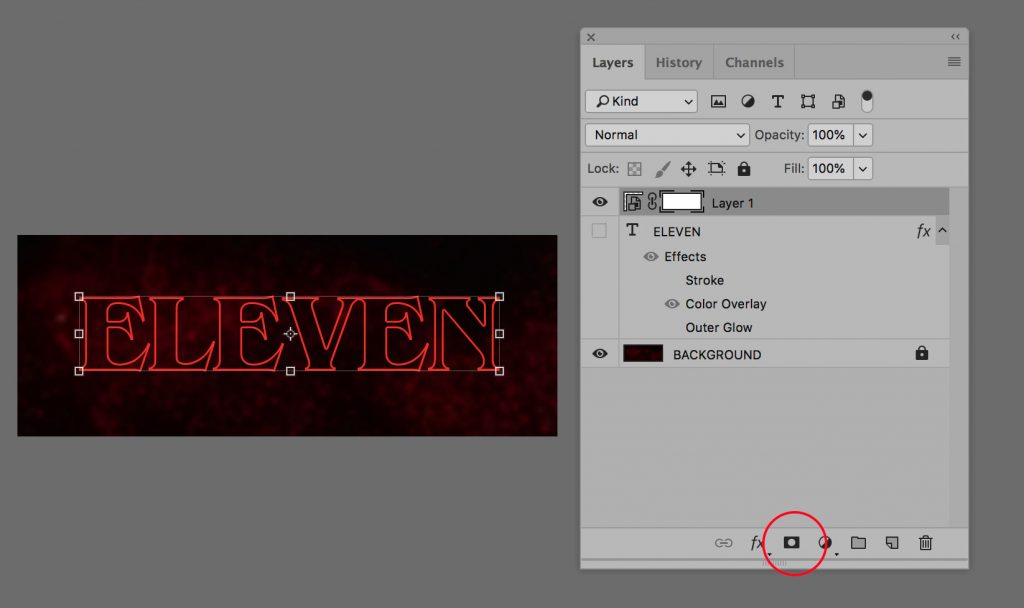 From here we want to select a soft Brush and simply brush over a few parts of our image at around 45% opacity, you should end up with this: 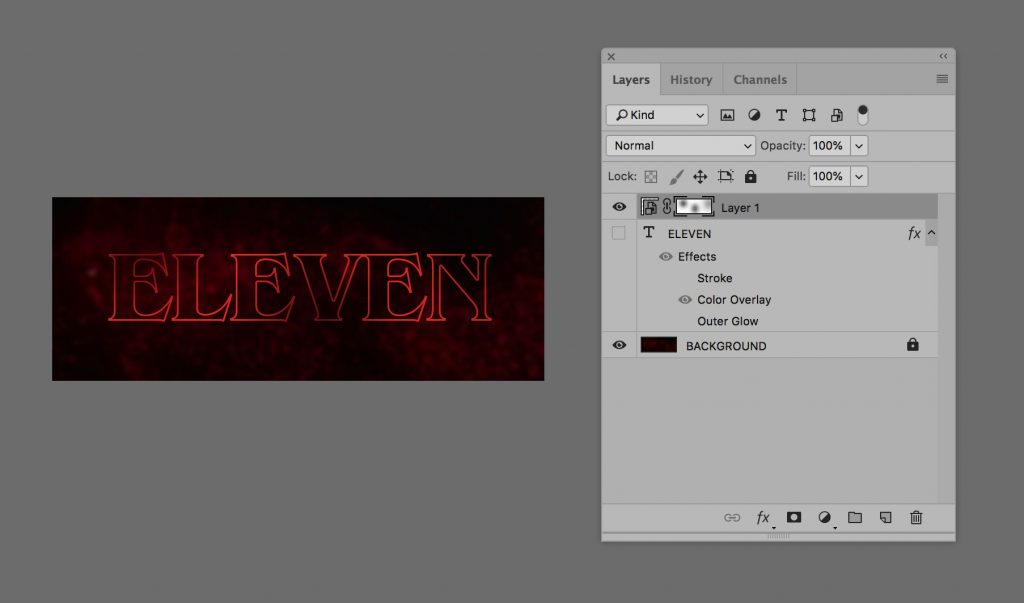 From here we want to duplicate our layer and apply a small gaussian blur, so to do this simply select your layer, then press CTRL + J to duplicate the layer, then go to Filter > Blur > Gaussian Blur around 2.7px strength. Once this is done, duplicate your newly blurred layer, and you should end up with this. 3 Layers, with the base layer and 2 layers which have been blurred ontop. 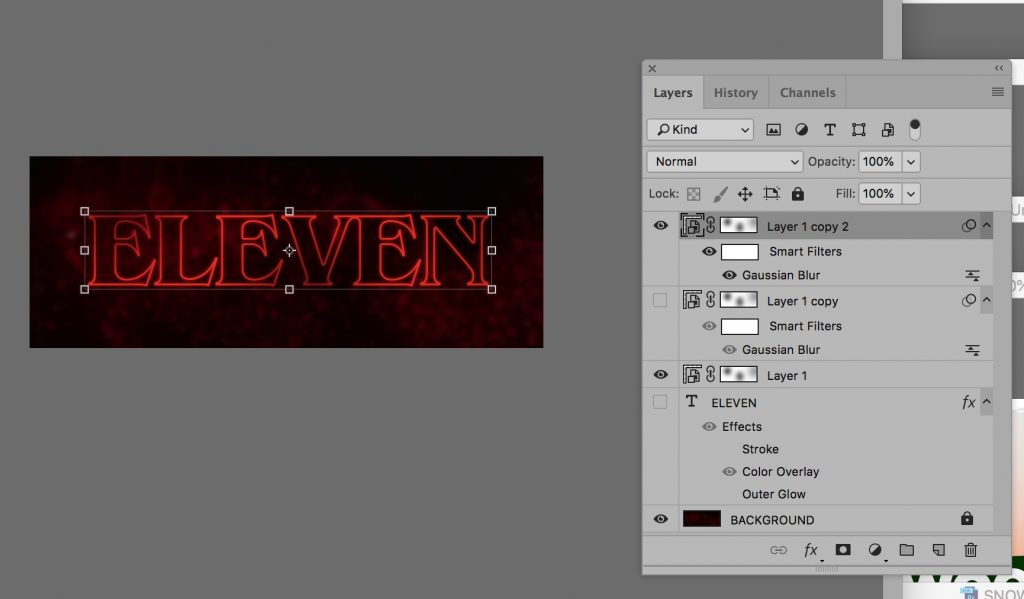 For the final step, all you need to do is add a subtle outer glow of the same red (or slightly darker) we used before, to create that truely “Stranger things” feel to your font design. I also duplicated the blurred layer a few more times to exaggerate the effect.

How to Import Brushes Into Photoshop (2022 UPDATED)

Free Icons Ready for some Free Icons? It’s been a while since our last Freebie so we thought I…

Learn to Feather in Photoshop Simple answer….I can do it with my eyes closed. But less about m…